Yes, he actually took to Twitter to preach the evils of violence and corruption.

The “Supreme Leader” censors the internet as much as possible in Iran, yet he clearly has no difficulty accessing sites that are banned to the general public, such as Twitter. He uses this platform to basically belch forth rivers of hypocrisy, arrogance and deceit.

Many of us were delighted to see him Tweet in English, as it meant we could put aside the translation feature and tear into him with no worry of words and phrases not translating smoothly to Farsi. Certainly, I pounced on this golden opportunity to let him know what I thought of his various comments. Browsing comments left by users, it was somewhat encouraging to see that most of them were arguing with or outright insulting him (mea culpa) rather than in any sort of agreement.

He commented on Iran’s economy for instance, claiming that holding fast to religious ideals would surely stimulate it and bring better conditions to the people. His regime’s performance on Iran’s economy can be summed up in two words. Utterly, and destroyed. Is this a testament to the bubble he lives in, surrounded by people who are not only too afraid to criticize or correct him in any way, but also actively shielding him from the signs of his incompetence from the outside?

We as the global public see footage of people in Iran rummaging through trash to find something to eat or sell. We see the worker protests and strikes. We also see the protesters burning images of him in the streets and chanting  “Death to the dictator. Death to Khomenei, Death to Rouhani.”

Even small children have been filmed chanting for his downfall, and the regime’s end.

Could he truly be this insulated, or is this willful ignorance and hubris on his part?

While he was not personally in power during the Iranian Massacre of 1988, it was the same regime that holds power now, and he certainly held some kind of position then. 30,000 Iranian citizens who were imprisoned were hanged from cranes, shot, tortured and otherwise brutalized by the very same government in place now. Many of them were women and teenagers. Students.

He thinks to lecture us on morality or problems with violence?

The Godless creature knows no shame. I told him so. It felt good.

I am not in Iran, and as far as I know, there is no safe or reliable way to donate any money to the people there who are suffering poverty, such as we see in Kermanshah with displaced earthquake victims, or in various cities where workers are on strike over not being paid in a year. I wish I could help them more directly, but since I cannot, then I can only lend my voice where they are not free to speak up for fear of jail or death.

If you’re reading this and you feel so inclined, I would encourage you to find his Twitter, along with that of Rouhani, and do the same. There are times when all we can do is speak up and give a voice to those who essentially have none at all.

His comment above, regarding firearms, where he says “The solution is to make them illegal.” shows us a few things.

It’s disturbing, as well it should be. It should not matter what your personal views on gun ownership are. When you see a murderous dictator extolling the virtues of disarming citizens, you should understand the motives are not honorable, that the interest lies not with the safety of the population, but quite the contrary.

Iran’s regime has been known to fire into crowds of protesters. It’s much easier to do this when they cannot fire back. They have been known to kill people in the streets, and an estimated 27 were killed recently during protests held in cities across Iran. The head of the regime who slaughters its own people is actually using social media to lecture us on violence and corruption.

Were we honestly to believe he cared one bit about any American killed anyway, when he is the one doing all he can to brainwash Iranian children to hate the United States and the west itself?

If you don’t believe me, allow me to show you just one of many large banners in plain public sight. This one is in Tehran, draped over a tall building for all to see.

Sure, Demon Gnome. You cry big tears to think of an American being killed.

A close relative of mine visited Iran a few years ago, and she saw this for herself. Family I can’t be too specific about here have reported the chants of “Death to America” and other propaganda poison being taught to young children, even in their schools. From a very early age, they are told that we are the devil. The enemy, the oppressor.

Even under such tight censorship and brutal crackdowns, the people of Iran continue in their protests, proving that they are not the mindless, brainwashed sheep he wishes they were, and he surely knows his power over them is falling from grasp a little more each day that this continues. His rhetoric is nothing more than a desperate attempt to legitimize the actions of his own government against the people and also a rare moment of truth from him. It is not every day a dictator actually admits to being one.

As Iran doubles down on its aggressive actions in Syria, drawing the ire of Israel and the United States with constant violations of their past nuclear agreements, perhaps he should worry less about gun owners here in America and a little more about all of the much bigger guns surrounding Iran.

“Hardliners, Reformers, it is game over now.”- A common chant in protests in Iran. 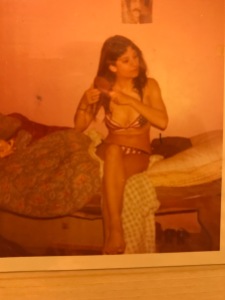